James Comtois opened up a blog post for comments on the recently completed Colorful World. I love the idea, and I commend his bravery in doing it. I’m sure no one is going to hop in and brow beat him (especially for what was by all accounts a hell of a show) but the act of doing it takes courage regardless of the consequences.

I offer the same for Foursquare.

Now. Seeing as none of you saw FourSquare I offer my own assessment of my work. I leave an overall assessment of the show to folks who have seen it, as I never have.

FourSquare was (as I have repeated ad nauseam to those around me for the last four months) my first opportunity in a long time to simply be an actor on a show, so I think that this serves as an excellent time to sound the depths and see where I am as a performer, and how well it served me on this show. 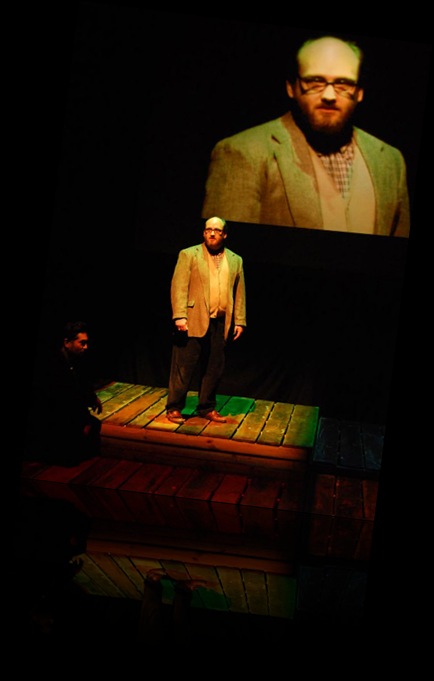 From Each According To His Ability…

What is my current ability level as a performer? We can’t very well judge me according to an objective standard… there isn’t one. So let’s do a quick and dirty blog-style Pros and Cons list shall we?

Overall I’m your B performer. I won’t steal your show, but neither will I ever sink it. And as I am a great clubhouse guy, I tend to make those around me better (read: more comfortable), so a net positive in your cast even if I’m not a glove fit for a character.

How’d that serve you?

Really well actually. The character and I really got along.

Bill Singer is a character in search of a story for himself. Socially deficient he loses himself in movies, specifically Woody Allen’s movies, trying to find a narrative for his no-point life.

When his wife leaves him he tries to recreate the story of her leaving in multiple scenes with varying levels of culpability for himself. He does the same with his attempted (and eventually successful) pick up of the wounded Beverly. He’s the one man nebbish Rashomon.

When life doesn’t match cinematic ease he reacts… poorly. He disconnects from the real and pulls entirely into his own fantasy.

Oh? A neurotic vulgar nebbishy wannabe Id on the verge of breakdown? I gotcha covered.

I succeeded with Bill in that audiences loved and hated him. I was able to keep the inherent danger of a man going off the rails without making him Evil. His need to be taken care of, and to have the movie of his life turn out okay outweighed the fact that he was utterly incapable of making that happen.

I failed Bill in that it was all a bit too jittery. The stops and stutters of Manuel Zarate’s language became too over the stop. There are also some quick shifts in tone and emotion that I never earned fairly.

Bill also exists structurally in counterpoint to the relationship taking place between his “Best Friend”, Rodolpho, and his “Conquest” Beverly. Beverly and Rodolpho are the Blue Danube, and Bill is the frenetic Flight of the Bumblebee on top of that. I had problems pushing the pace out of the two longer scenes that Beverly and Rodolpho share (I um… I couldn’t feel my legs – they were asleep after sitting so long) and so let the rising pace droop at two critical moments.

On the whole I feel that I handled Bill very well. Given a longer run I think things would have evened out and I would have worn him a bit more lightly. The language would have been even more natural and the more subtle humor throughout could have come through.

What Manner of Man is He?